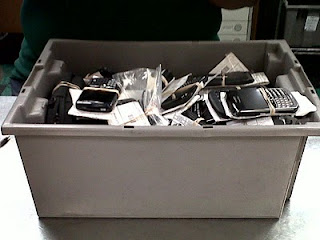 Last week I lost my blackberry in Grand Central Station. First I'll complain: I haven't synched in almost a year. They don't make the same version anymore...the "new and improved" version is plastic-y, doesn't have a flash in the camera, has worse reception (dont have good reception in my own home) and the sound quality is tinny and echo-y. And on top of all that, I siged a two year contract to get it.
I did feel a bit better when I saw this box of blackberries in the Lost and Found at Grand Central Station. This is just the box of blackberries. They had other bins filled with other kinds of phones. I was a bit comforted by that because I knew there must be so many others that understand this particular kind of aggravation. Saying misery loves company sounds awful, but it's comforting to know you're not alone!

By Sandy - October 09, 2015
We have an exciting new role for an Employee Communications Manager working with a global professional services company headquartered in New Jersey.  This is an ideal position for a candidate who can deliver engaging, professional and impactful communications materials across a variety of channels, while developing his/her skills in strategic communications.  The successful candidate will be well-versed in employee communications trends and best practices, particularly in digital communications, video, and social media, and can support existing company vehicles as well as bring new ideas on modern content and delivery. About 5 to 7 years of experience doing this in a B2B or professional services environment is required. Please Contact:  Jackie Mets at:   jackie@charet.com
Read more

How to Approach a Recruiter

By Sandy - March 06, 2013
Take a moment to think about the mail a recruiter gets.   Those that work with me know that I try to answer every email I receive.  I appreciate when people are considerate and get to the point.   I think if they took into consideration just how much mail we get,  a lot of people would change their approach.  I personally get about 30 direct, personal emails with resumes attached, per day.  If  I spent just 15 minutes on each one, it would take up almost the entire day.  Pretty soon I wouldn't have any clients at all. I recently spoke to a group of communication graduate students at a top university.  I added 15 entry level job hunters' cover letters to my slide presentation so that the students could see what I see.  This gripped their attention.   I think it really got the point across -- they saw just how bad the bad ones were compared to the good ones.  And they got the idea that if I'm looking at their letter along with 15 other letters, it better be good or I
Read more